Turkey’s pro-government press hailed a “groundbreaking” human rights action plan proposed by the ruling Justice and Development Party (AKP) yesterday. The first thing to note about this plan is that it tacitly admits that Turkey has a serious problem of widespread human rights violations, yet nobody seems prepared to say what these problems are.

As such, the government and their client press are giving off the vibe of a repentant domestic abuser telling his partner ‘I can change’, while still not admitting or apologising for any of their past behaviour.

According to the pro-government Daily Sabah newspaper, the human rights action plan is “expected to be executed within the upcoming two years”. I would have personally avoided using the word “executed” in this context, but that’s just me. President Recep Tayyip Erdoğan said in a speech that the plan will feature “broad-based consultations”, and will include “11 principles, the first of which is the fact that human rights are under the protection of the law”.

Erdogan: 'No one can be deprived of his liberty because of his criticism or expressions of opinion.' 🤪🧐 https://t.co/uVVsYwzoEW

Article 299 of the Turkish Penal Code makes insulting the president a crime, and it’s a charge that has been hugely expanded in the years since Erdoğan took over the office in 2014.

Sebahat Tuncel of the Peoples' Democratic Party (HDP), who is in jail for supposedly supporting the Kurdistan Workers’ Party (PKK), recently had an extra year added to her sentence for saying the president is an “enemy of women and Kurds”. I would personally say that this is clearly a critical opinion, not an insult, even if the president was offended.

And that is just the problem. Guilt seems to be being decided not by the rule of an independent judiciary, but simply by how Erdoğan or his supporters are feeling. It is a government, you might say, which makes decisions based on which side of the bed they got up on that morning, rather than based on the law.

“Turkey to upgrade human rights by 2023”, advertised government mouthpiece Hurriyet, a formerly independent newspaper bought by the AKP-supporting Demirören family in 2018. The newspaper reveals that the Turkish government sees the human rights action plan as part of a process leading towards a new constitution. Erdoğan also said in his speech that “we will be focusing more on our efforts regarding the European Union, especially concerning the visa liberalisation dialogue”. So it is clear that the AKP sees this plan as a concession towards the EU to restart talks on greater integration.

Personally, I think the EU should have offered Turkey visa liberalisation years ago, but it shows Erdoğan is still thinking about Turkey’s relationship with Europe in a largely transactional way. We give you some human rights, you give us visa liberalisation.

Other components of the plan include “a comprehensive effort to amend political party law and election law in order to strengthen democratic participation”, strengthening the power of the government’s human rights ombudsman, and the creation of a human rights monitoring commission for penal institutions.

Hurriyet also reported that: “The action plan puts an end to practices such as detaining a person outside working hours or in the middle of the night in a hotel room solely for the purpose of taking a statement”. It’s good to know that the government is promising not to secretly detain people in the middle of the night, a practice that would already violate the European Convention on Human Rights.

Turkey regularly ignores decisions of the European Court of Human Rights, including over the unlawful detention of former HDP co-leader Selahattin Demirtaş, casting doubt on the government’s commitment to international human rights law.

In fact, looking at the overview of the action plan published by state-run Anadolu agency, there is very little which addresses the main complaints about human rights violations in any concrete way. 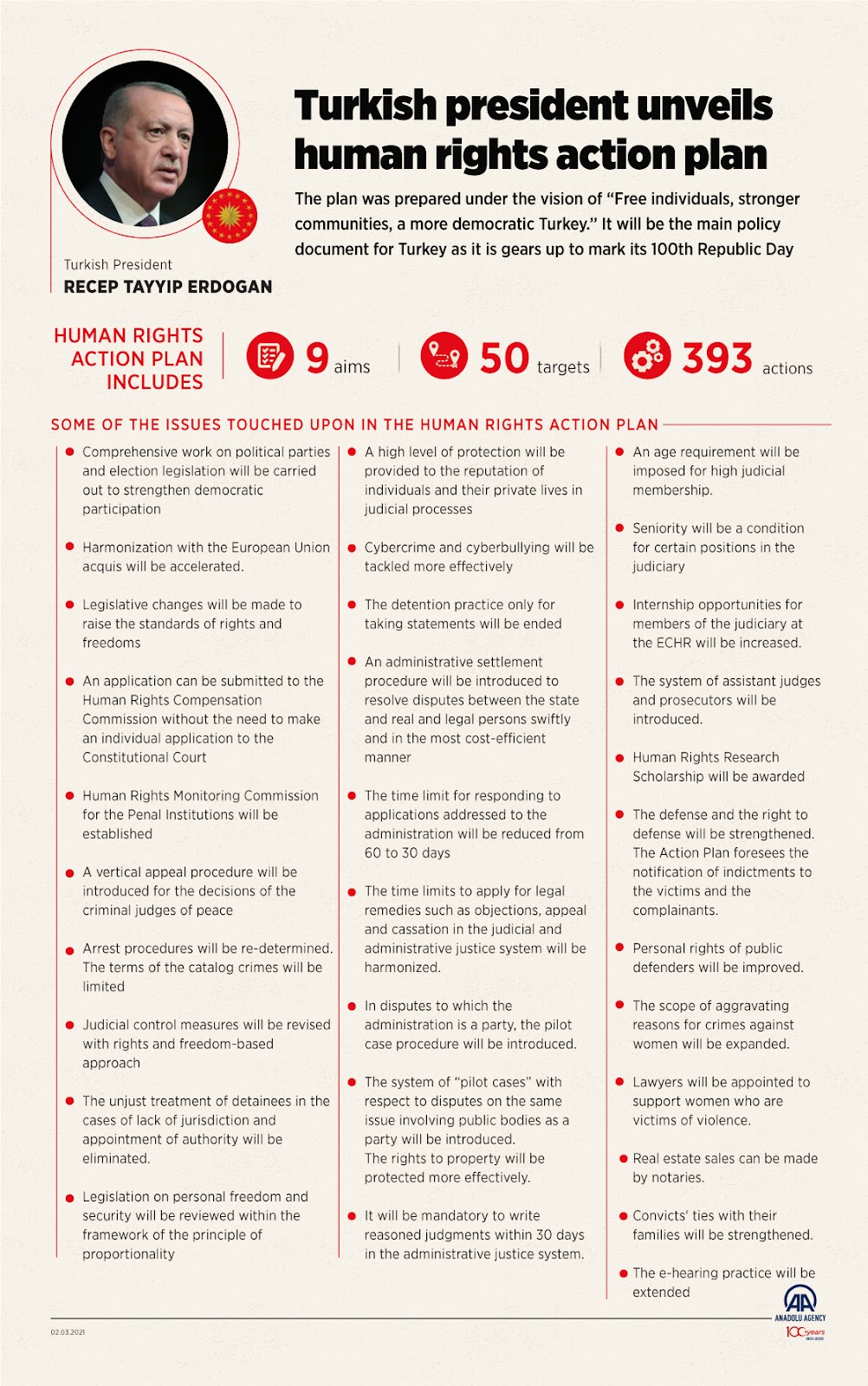 Many of the points are vague and lack any substance. “Legislative changes will be made to raise the standards of rights and freedoms”. Alright, like what? How about repealing Article 299 of the penal code, so the state can’t jail people for a meme of the president looking like Gollum from Lord of the Rings? That would be a good start.

The plan looks like a box-ticking exercise, offering reassurance to groups of people concerned about their rights (though not Kurds obviously). “Lawyers will be appointed to support women who are victims of violence”. Does this not happen already? This is the bare minimum of rights protection, and will not give confidence to any marginalised group that the government is serious about improving its human rights record.

The whole thing looks like a desperate attempt to plaster over the cracks in the government’s public image and frayed relationships with the United States and the EU. But nice words and empty promises aren’t going to convince either Turkey’s long-time allies, nor the millions of Turkish citizens deeply afraid of what their own government might do to them if they say the wrong thing, vote for the wrong party, or belong to the wrong ethnic group.

Turkey’s people deserve actions, not just promises. And Turkey’s allies also want to see concrete reforms, including the end to judicial harassment of critical voices like Selahattin Demirtaş, Osman Kavala and Ahmet Altan. They want to see free and fair elections, democratic state institutions, and media plurality. But none of these promises are aimed at these goals, and the government’s media mouthpieces won't convince sceptics that they are any more than a cosmetic bandage over a gaping wound.

(The opinions expressed in this column are those of the author and do not necessarily reflect those of Ahval.)

The opinions expressed in this column are those of the author and do not necessarily reflect those of Ahval.
http://ahval.co/en-110975